The Q 3010i is a slim-line bookshelf or stand mount speaker from Q Acoustics core loudspeaker offering, designed to deliver beautiful sound into your home, from a compact cabinet design Our revolutionary 3010i speakers are compact, but deliver nothing short of exceptional sound quality. They can fill a room with open, immersive sound with their 4-inch precision drivers and feature Point-to-Point™ (P2P) bracing, which supports the parts of the enclosures that need to be stiffened.

The focus of any great loudspeaker is to produce an open, ‘being there’ sound and the Q 3010i speakers deliver just that despite their compact size. Boasting room-filling sound with its 100mm (4 in) and 22mm (0.9 in) precision drivers, focussing on power-to-size ratio, the crossover has been revised to take advantage of a larger cabinet volume to enhance sensitivity and bass extension. The Q 3010i speakers can be shelf-mounted on compliant, pre-fitted rubber feet or stand-mounted or wall-mounted on optional, dedicated stands and brackets.

Q Acoustics P2P™ (Point to Point) bracing across the 3000i series supports the parts of the enclosure that need to be stiffened making the new enclosures exceptionally rigid, improving the focus of the stereo image and giving the soundstage more accuracy than ever before. (* entire series) 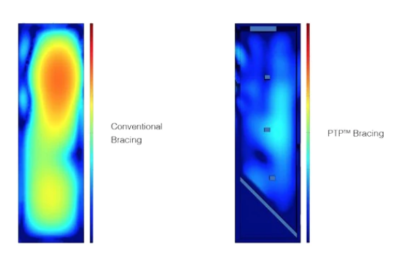 The Q 3010i maintain the same acoustically optimal front profile, but have been made slightly taller and 25% deeper than previous models. This increased internal volume has enabled Q Acoustics to gain an extended low frequency response from the ported design so that more-than-ever the smaller enclosures in the range belie their diminutive stature with an impressively large-scale sound. As an added benefit the enlarged front-to-back dimension means that any cone- generated noise reflected from the back wall of the enclosure and out through the cone itself is reduced.

3000i Series tweeters are decoupled from the baffle via a compliant suspension system. Vibrations from the woofer, which can impair the performance of the tweeter are isolated allowing the tweeter to perform with dramatically reduced interference.

Whichever 3000i model you choose the cone is precision formed from impregnated and coated paper and teamed with a newly developed, low-hysteresis, rubber surround. The coated paper cone provides the optimum balance between stiffness and self- damping which means it can accelerate without flexing and stop very accurately without unwanted resonances.

Conventional terminal panel cut-outs have been removed, giving greatly improved structural integrity to the enclosures and new low profile binding posts have been incorporated with sockets deep enough to accept 4mm (0.16 in) Banana Plugs. The speaker can be positioned very close to a rear wall even when banana plugs rather than spades or bare wires are used.

Beautiful Inside and Out

Not only does the entire 3000i range features all new enclosure aesthetics but it also offers 4 new contemporary finishes. The new 3000i series speakers are available in four standard finishes; Graphite Grey, English Walnut, Carbon Black or Arctic White. All are finished with an attractive chrome bezel around each driver and feature magnetic speaker grilles.

“Whether you’re looking to put together a Hi-Fi system on a budget or simply don’t have room for larger stand-mount or floor-standing speakers, the 3010i are unlikely to disappoint. These compact bookshelf speakers pack more sound per pound than you have any right to expect for the money.”

“The 3010i are incredibly sturdy and look great, sound superb and cost relative peanuts…Despite the compact size there’s a richness to the sound and a fullness to the bass I wasn’t expecting…Stunning”